July 25, 2018
Today’s title should be really called "Ship Day in Port"!  As is customary for our group we like to utilize the ship facilities and explore when we are in a standard port.  In this case Nassau. The ship was docked really early at about 8 am and left at 11:59 pm.

We woke up late at about 9 am.  We got dressed and went to a packed Windjammer buffet.  Nothing really good to write about.  The place was jam packed and no room anywhere.  We were there late enough to get a seat in Chops  after they stopped its use for real suite guests. Junior Suites don’t rate this special perk. I found the food to be cold and very blah.  Oh well.   Maybe it was late, but it seemed half the ship was there. Another part of our party went to the dining room and said it was good.  We shall try there tomorrow.

We then all met for mini golf at the Mariner Dunes.  Very nice refurbished golf course.  It used to be in the back of the ship where the new Flowrider, Skypad  and water slides were addded.
The mini golf was great.  It now features the new look that has been in use on Royal ships for some years now.  The group had fun. 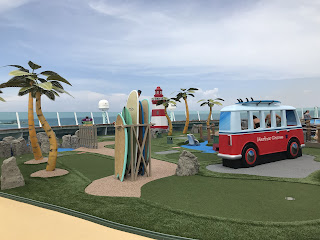 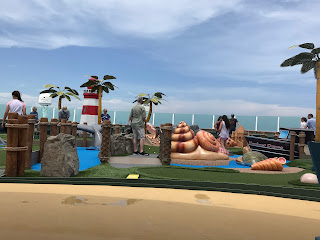 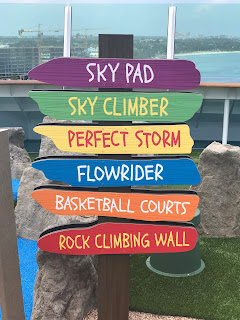 We then had K and friends go  swimming and try out the new Perfect Storm.   They loved the new slides.   Said they were a lot of fun! 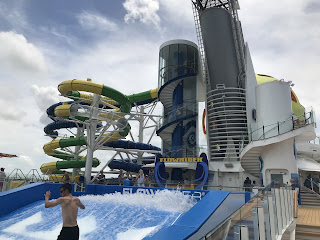 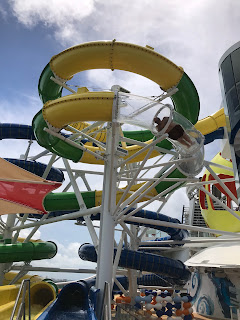 We did not try the Skypad. 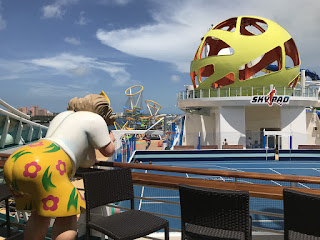 The team then decided we would go to try out the new Laser Tag in Studio B!  It is called the battle for a Planet Z!   It was a lot of fun.   It is first come first served.  The line was very short since it was a port day.  There is a max of 14 players and two teams are formed into the Aliens and the Robots.
You see a short briefing video, receive your gear and gun and then have about 7 minutes of fun.  The whole set up occurs in the area of the ice rink on a normal floor. There are walls made of rubber bounce house that is filled up. Just as the name implies, you are shooting the opponent.  Lots of fun to be had. Our team had middle of the road scores, but two honorable mentions...the most accurate player and the most trigger happy.  (That was me!)  This is a must do for those that will enjoy it! 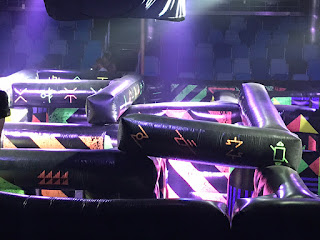 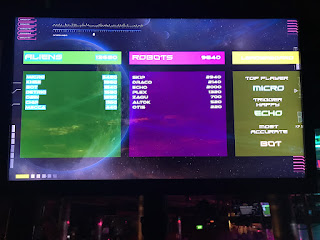 We then had some time to do a music trivia in the Schooner bar before Dinner.  Dinner was in the new Izumi Hibachi. We had a great meal.  We chose it as we did not have many choices in the dining room and always love the Hibachi.  It was worth it.  We had a great chef and an even more awesome server.  Eduardo! He really took care of us! Thanks Eduardo! 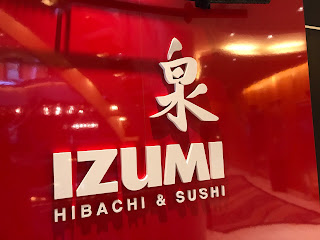 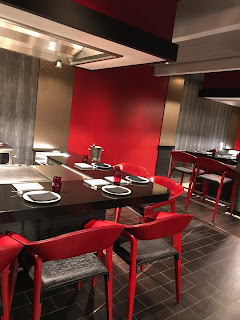 After dinner we went to the show.  It was a cover band night.  Not just a cover band!  They were awesome!  Called Private Stock.  They have been around for 28 years and really do Rock!  We can’t say enough great stuff about them!  If they are ever in your area or on your cruise, they are a must see!   Great rock and roll from all the years past!   From Billy Joel to Elton John to Stevie Nicks and hair bands!   Don’t forget Journey!

It was now getting late and the gang was tired.  All retired at 10:30 ish except for me and a friend. We went to see The Quest scavenger hunt in Studio B!  Without giving away all the fun of the Adult Quest, it involves some crazy things for a great set of people to participate in.  We watched them call up teams to do the wackiest of things. Like a guy and a girl need to switch clothes!  You can see where this is going.  Don’t take the kids, they are not allowed.

What a great day! Tomorrow is a cruising day! 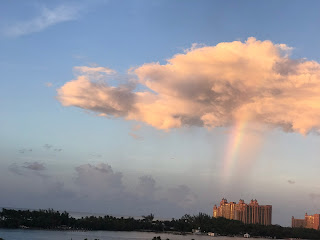 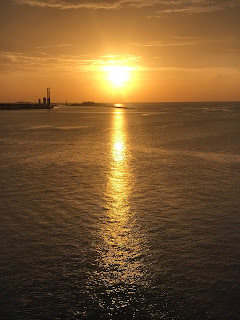 Popular posts from this blog

August 18, 2018
We got to stay in a refurbished room at the Coronado Springs Resort in late July 2018. The area we were in is known as Casitas 2.   Casitas 2 is closer to the main building, as preferred, but starting to get a little further away.  Not as far as the other areas. From what I can tell these areas were the first to be refurbished as the resort is still going through the existing room refurbishment. The entire resort is getting its own extreme makeover. Besides the guest rooms, the common areas and restaurants are getting a new look as well as the pool area later this year.  In addition they are  building a brand new 15 story tower with new rooms as well.  The theme is the southwest.  They are toning down the heavy theme and making the rooms more upscale for the heavy convention clientele as this has one of the largest convention areas on property. In our eyes they did a great job! Very updated, modern but a hint of theme and not over the top. The use of granite topped furnit
1 comment
Read more

July 27, 2018
It’s Sea Day... we decided we were going to do breakfast in The Dining Room. The group met on level 3 to start the meal.  The breakfast has hot meals that can be ordered from the wait staff and a buffet for all the cold and continental items.   The wait staff was great and the food came out just right. Nice and relaxing compared to the Windjammer. After breakfast K and a friend went to Jaime’s for a pre-reserved Cupcake decorating class. K says:  "It was so much fun!  We worked with pre-made cupcakes from the chef.  He showed us how to ice them with special designs.  He showed us how to make a rose out of fondant.  It was so cool.  We decorated four cupcakes each."  8 cupcakes for the whole gang to eat later! While the decorating was going on, the rest of the group walked around the ship and everyone met up at our cozy Starbucks corner.   Drinks and snacks just like on land with a great view outside the big ocean view and promenade window. The gang went up to the
Post a Comment
Read more

July 22, 2018
We woke up about 7:30.  Got ready and headed to the free breakfast.  It was good and enough to fill us up. The usual continental breakfast with some hot items as well.  Like eggs and such. We all got the bags together after 9 and packed up the car.  We were on the road by 9:30. Coming from the west side of the airport we hit some morning traffic. Nothing awful, it kept moving, but it was just under 30 minutes.  We saw first sighting of our home for the next week at 9:55! Still very early. We unloaded the car, parked it and got into the terminal. Check in was very easy and we went to the emerald area to sit. It was not a long wait at all. We were boarding the ship at 11am. Took the welcome aboard picture and headed on to the ship. First thing we needed to do was to head the shore excursion desk. We had read that if you booked a bungalow on Coco Cay, as we did, you could head there upon arrival and pick your bungalow. We pre-ordered a bungalow.  These are done through the cruise
Post a Comment
Read more